skip to main | skip to sidebar

Funny: after I testified that Illa is my current most long-wearing, least-damaged np ever, it chipped. Sigh.

I technically shouldn't have worn this polish until after rainy week ended, since only sunlight manages to do glitter any justice, but I also need to do the next series in a row and I figured that I needed to return this polish to its rightful owner.

The story: My roommate presented me with a creamy yellow polish stuffed with holo glitter. She proclaimed that she hated it and never wanted to see it again, and that I was welcome to donate it, toss it and use the bottle, whatever. I asked her what was wrong with it. She said it looked like really questionable excrement (not in her words, of course) slathered over her fingernails.

I swatched it over a card. The issue, I saw, was that the yellow polish was so pigmented it covered up the glitter and made it... um, textured. (Think Lippman's Funky Chunky.) She also commented that she thought she herself looked terrible in yellow.

I wanted to make something for her---clear would diffuse the pigmentation enough to show the holo glitter, but wouldn't solve the 'yellow polish' problem. I remembered that she liked For Audrey, when she'd borrowed the polish for an event. 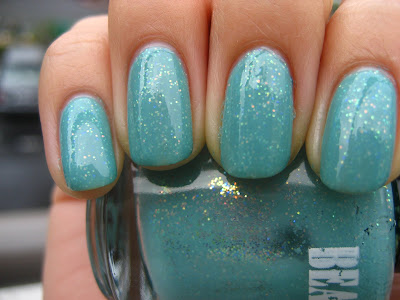 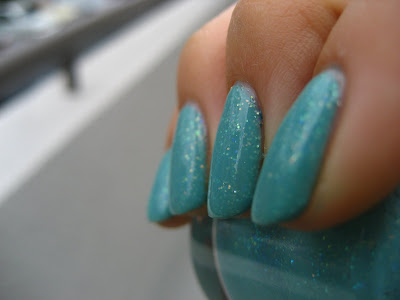 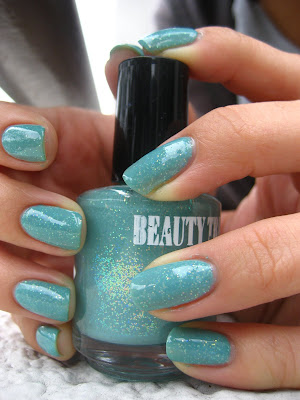 All of these pictures are, again, taken in cloudy weather.

While I was putting this little sucker on this afternoon, I hated it. So streaky. So thick. So runny. The brush held on to all of the polish and was so large that it was impossible to maneuver on my tiny nails--thus, the gigantic gap. It took three coats to even approach evenness--in these pictures, it still isn't even enough but came out fine with one coat of Seche Vite.

I didn't know what Spring Break in Malibu looked like until I saw it in the pictures. Now, I like it. It's exactly what I was going for--a squishy aqua jelly with little holo particles scattered throughout, reminiscent of looking through blue water into the sand on a beach. There's a lot more glitter than I'd accounted for, but that's okay.

Recipe:
2/3 of yellow creme + holo glitter polish from a brand called Beauty Treats--no name. *
15 or so drops of Nfu-Oh 119
Add clear to taste

(You better wear this during spring break.)

NOTE: okay, y'know what--I said it was holo glitter, but upon staring at my nails and at the gigantic pictures I've posted on the internetz, I've decided that it's multi-colored glitter instead: dark blue, lighter blue, green, yellow, orange. Doesn't make it any less fascinating, really. Just to be accurate. :)
Posted by Irides at 2:59 PM

Irides
Uh, I'm bespectacled, asian, left-handed, synesthetic, a female INTJ (there's less than 1% of us in the US population, woot), and mostly really uninteresting. :)

If you have a lacquer you'd like to see, a request, or if you are a company that would like your product reviewed, please drop me an e-mail at irides at gmail dot com.

Thank you all for visiting my blog! It means a lot to me. :)